Pennsylvania is the greatest state ever. But, before I expand on that, I guess I have to give a nod to Virginia. After an extended night-long drive on Tuesday, we arrived at Virginia Beach early Wednesday morning. We pretty much spent the entire day lounging on the beach, and for once in my life I escaped with only minor sunburns.

Story of My Life

I generally fry like a egg on blacktop in the summer, and my mom makes me frequently reapply SPF 100 sunscreen even when I am in complete shade. My two sisters favor our Native American heritage more when I comes to tanning, especially my “little” sister who sometimes looks nearly African American in the summertime. However, for some reason, my older sister burned REALLY badly. Since I know how much Alyssa loves my shout-outs… IT WAS HER 21ST BIRTHDAY ON JUNE 5TH!!! She wasn’t too happy about being burnt on her birthday and having to stay out of the sun and kept declaring that it was the “Worst Birthday Ever.” She wasn’t really miserable, she just likes being dramatic (Hopefully I don’t get in trouble for that one- Love you Alyssa!). 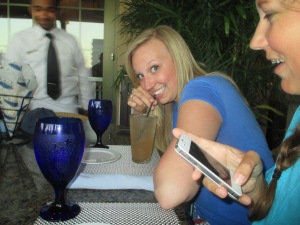 The beach was great and all…. but, on Friday we headed out to PENNSYLVANIA!!! After a long drive through Delaware along the way, I determined that Delaware is the most worthless state (sorry, Joe Biden). The license plates there all boast that it was the first state, so the bar was set pretty low for the states that would come after.

After 5 hours and some minor squabbling in the truck, we made it it Philadelphia. Apparently Alyssa was under the impression that we were just going to hop out and see the Liberty Bell and then hop back in and drive on, so she didn’t bring proper walking shoes. As it turns out, we had planned to stay two nights in Philadelphia. Much to Alyssa’s surprise, there is more than the Liberty Bell in Philadelphia, and while she remembered to bring a massive bottle of wrinkle release spray, she didn’t have proper walking shoes.

Proper walking shoes were a necessity, especially today. Alyssa happened to record our trek on an app, and in the end, we walked 16.5 miles. I fortunately had on my Birkenstocks, which are quite possibly the greatest, most comfortable shoe known to man. Even still, after 8 hours of walking, my ankles were looking more like cankles from being swollen. My whole family was huffing and puffing by the end of it, but we covered a lot of ground! We started out in the historical district, made our way to a cool and slightly creepy medical museum, and then ended with the Eastern State Penitentiary (and then ice-cream, of course 🙂 ).

I really wish that I lived in Philadelphia back in the day. Those historic houses are adorable, and I would love to live in them. Also, I am sure Betsy Ross was a super cool lady, and we could have sat around and sewed together all day.

You may have been wondering this entire time, what on earth does #PhillyJesus mean. Great question! On Friday night, we were approximately 5 minutes into our little hunt for some famous statue, when we found it along with Jesus!

We even got to talk to him! 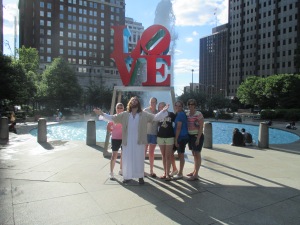 As it turns out, this is his ministry, and he doesn’t ask for money. He said that he uses the opportunity to dress up and stand in front of this statue as a way to plant seeds and talk to people about Jesus.  He just asks that you use the hashtag “PhillyJesus” on social media. Philly Jesus is apparently pretty well adjusted to our current culture. He was out again today when we walked by, so if you are ever in Philadelphia you should stop by and have a chat with Jesus!

Tomorrow morning we leave for the last stop on our vacation, which is the one I am most excited about. Stay tuned for my final Stuckwisch Family Vacation blog!